Since 2001, Akoumba Diallo has worked in promoting the transparency of contracts and mining revenues and in 2004 became the first representative of the Guinean Association of Publishers of the Independent Press within the national steering committee of the initiative of transparency for the extractive industries.

In collaboration with the Open Society Initiative for West Africa and the Higher Kountia Institute of Information and Communication, Akoumba was co-editor, in 2013, of the practical guide for journalists in media coverage of the industrial sector extractives.

From 2013 to 2018, Akoumba was selected by the NGO Revenue Watch Institute to become Natural Resources Governance Institute resource person. In August 2017, Akoumba was co-trainer in the young videographers’ project of the International Finance Corporation (IFC-Canada). In April 2018, Akoumba contributed as an expert to the 21st global program on the fight against corruption, financial crime, and asset recovery. Akoumba also hosts the investigative program (Talkshow) "Info à l’état brut" on radio Space FM. 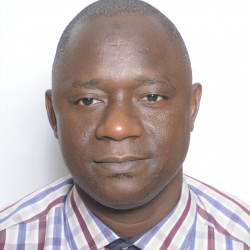