ECPMF and its partner organisations invite you to an expert talk on anti-SLAPP solutions, which will be co-hosted by David Casa MEP, Stelios Kouloglou MEP and Viola von Cramon-Taubadel MEP.

Strategic Litigations Against Public Participation (SLAPPs), refer to cases where the plaintiff, often a large corporation or rich politician, initiates legal proceedings against journalists and other critics to stop investigative research, silence criticism or squash political expression. Their aim is to trap journalists or critics in lengthy and costly procedures. Some SLAPP cases result in financial ruin for the journalists or the closure of media outlets.

Many journalists face different kinds of SLAPPs in the course of their career. When Maltese investigative journalist Daphne Caruana Galizia was murdered by a car bomb in 2017, the world was shocked. Also shocking were the many defamation lawsuits that were brought against the journalist, some after her death. Her family have now assumed responsibility, according to Maltese law, for fighting these lawsuits. Another journalist facing a SLAPP is Carole Cadwalladr of the Guardian newspaper. Arron Banks, who was a prominent ‘Leave’ campaigner during the Brexit referendum, filed a defamation lawsuit against her. Consequently, Cadwalladr could face a legal bill of at least one million pounds – threatening her with bankruptcy. SLAPPs are also commonplace in the Balkans; take Croatia as just one example. Journalists there are regularly confronted with defamation lawsuits. At the end of 2018, there were almost one thousand ongoing defamation cases against Croatian journalists.

This expert talk follows an earlier meeting led by Aberdeen University, which produced a significant report on the use of regulations to undermine press freedom and the rule of law in the EU. It will bring together journalists, politicians, lawyers, scholars, civil society organisations and other stakeholders. The aim is to create a platform to share and gather expertise on potential anti-SLAPP solutions. In the long run, ECPMF in co-operation with the aforementioned organisations and others will use the strategies that result from this meeting to convince EU institutions to create mechanisms that would help to limit the abuse of defamation laws.

Please register for the event here. 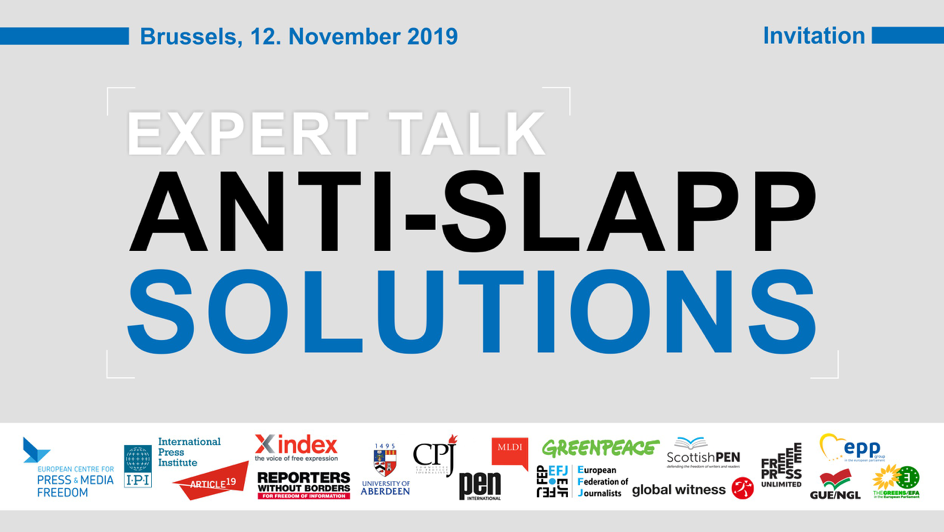