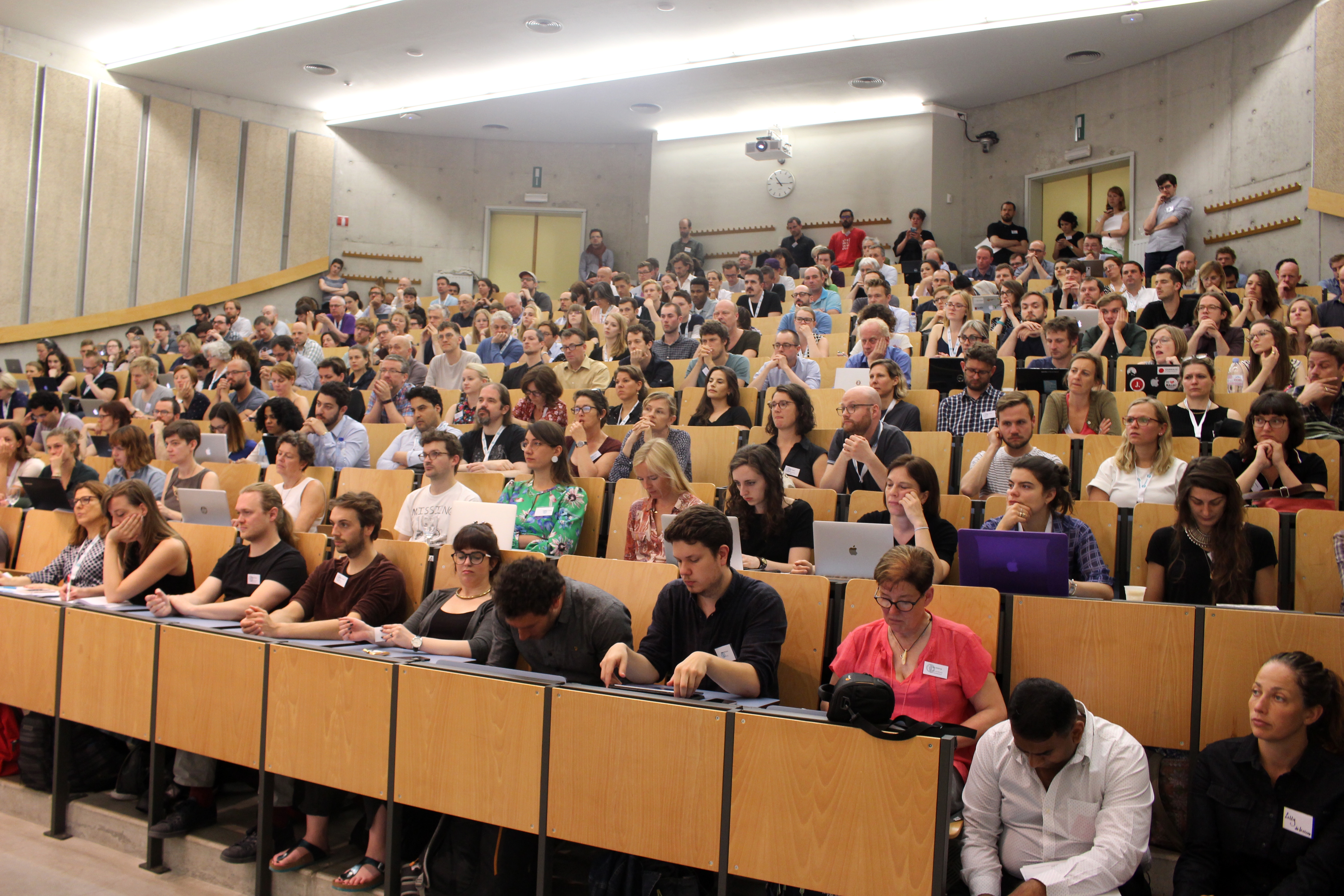 The European Investigative Journalism Conference & Dataharvest was incubated by Journalismfund.eu for a decade (2008-2018) before it became independent. The conference is a place for people to meet, exchange skills and ideas and, ideally, collaborate on stories.

Formally founded in 2011, the EIJC & Dataharvest merged three networks: journalists, coders and FOI- specialists. The event was organised by Journalismfund.eu, Wobbing.eu and Farmsubsidy.org to create an opportunity to learn from each other, share and develop best practices, make contacts and develop stories together.
The roots of the conference, however, date back to January 2007. That's when a network of journalists specialised in the use of freedom of information legislation as a research tool gathered for the first time in what would become an annual meeting in the Wobbing.eu network. They worked on shared considerations such as access to data, obstacles in access to information and privacy. Another network of journalists and coders had emerged out of the Farmsubsidy.org group that accessed, compiled and worked with information about the EU's agricultural policy.

The special profile developed gradually over the years. From an improvised get-together in May 2011 in Brussels, 35 founding participants laid the ground for the future of the conference, adopting the name of the Farmsusbidy.org networks' gatherings: Dataharvest. Since then, the conference has gradually grown in focus and size. It went beyond discussing farm subsidy data and FOI legislation, offering lectures and workshops on online and database searching, data analysis and data visualisation. FOI experts were invited to share their experience and best practices. Brainstorms were organised to get new story ideas. Coders and data journalists exchanged ideas and work methods together. Cross-border investigative stories were shared.
By 2015 the features of a genuine European Investigative Journalism Conference were clear – with the particular features of a strong focus on all aspects of data journalism, networked collaborative journalism and entrepreneurial journalism.

And the approach of the conference worked: several stories, projects and networks in Europe have come to life at one of these editions of the EIJC & Dataharvest and we hope there are many more to come. Here's an overview.

Anna Alberts: "Our project subsidystories.eu has brought together all regional and national beneficiaries lists of the ERDF, CF and ESF, the most important funds of the European Structural Investment Funds. On the website subsidystories, this data can be downloaded, visualised and analysed."

"When we came to Dataharvest, we had the start of a list of regional and national data portals for the different funds.

At Dataharvest we completed this list, found a developer willing to work with us and ran the first scrapers and analysis. We gathered hunches from journalists and found that so many journalists were interested."

"In the next months we met several times, the Follow the Money team continued to work on their idea of an app and what stories or analytics could be generated whereas the OKI/OKFDE team secured funding from Adessium. This process of gathering the data, scraping, cleaning validating it, and getting it into one standard took over 6 months. Together with the help of volunteers and journalists, we launched the website OKFDE and OKI subsidystories.eu in March 2017."

"We just started a research project on municipal level data with a grant from the Aaron Swartz fellowship. The research is titled: "The locally funded Europe: analyzing the composition and grant-effectiveness of EU subsidies on a municipality level”. OKFDE and OKI are looking for ways to update the data automatically, and the first cross-border collaborations are set up with journalists from around Europe.

For the future, we hope to extend this work, add different data-sources around European Money flows. But most importantly, we hope that the data gets turned into cross-border projects and investigations and good stories."

The group met during the previous conference to discuss their hypotheses. The conference proved to be a good central gathering point.

They found that the European Union has deep pockets when it comes to security. Major defence contractors and tech giants compete for generous subsidies, to better protect us from crime and terrorism. At least that’s the idea. But who really benefits? The public or the security industry itself? Over the past year, they’ve worked with more than twenty journalists in eleven European countries to investigate this burgeoning sector. They quickly discovered that the European security industry is primarily taking good care of itself – often at the expense of the public.

Through the investigative project ‘Security for Sale’ (supported by Journalismfund.eu's ECB-grant programme), they bring you up to speed on EU policymakers and industry big shots who’ve asserted themselves as “managers of unease,” on the lobbies representing major defence companies, on the billions spent on security research, and on the many ethical issues surrounding the European security industry.

The group still needs to publish some stories. However, they are open to publishing more if new information comes in. They have established good relationships with their partners.

When the team attended a previous edition of the EIJC and Dataharvest conference, they had just received access to some crucial data and a brief summary. It was the largest leak in the history of sports - the data included 18.6 million documents, including original contracts with secret subsidiary agreements, emails, Word documents, Excel spreadsheets and photos. The data set extended into the year 2016.

EIC partners published some of their findings at the end of 2016, allowing for an unprecedented look into the gloomy depths of the modern football industry.

See what was published here. Also, read about how this project shaped their network.

The network is developing several new investigative projects in parallel, partnering on in-depth reporting at source and with a focus on European leads that could expose how power structures affect European communities. Follow @EICnetwork to read their last stories and stay tuned for what's coming.

Medicamentalia is a project about access to vaccines, the relation between pharma companies and countries.

Eva Belmonte: ‘For us, the contacts were key for the projects we were working on. New ideas and projects began after the last conference (EIJC16). We presented the first version of Medicamentalia in the last EIJC16 & Dataharvest and met a lot of people working on access to medicines in the conference during the round table sessions. Later, we worked with some of them for the second phase of Medicamentalia, focused on vaccines. We even presented proposals together, for example, to the European Commission. And we plan to continue doing it.’

Eva Belmonte: ‘For a medium non-profit newsroom as we are, having such a list of contacts of people in other countries with similar interests is key to reach more audiences and apply for funding.’

‘Currently, we’re investigating other issues on the same field: access to health and relations between pharma companies, doctors, and associations. Specific sectors: women’s health, HIV, etc. So we will continue looking for people working in this area in the next Dataharvest & EIJC.’

A group of 29 journalists took the European Parliament to court over denied FOI requests.

The 'Fri Adgang' series, which even won an award

On 10 September 2018, the board of Journalismfund.eu has decided to make The European Investigative Journalism Conference (EIJC) & Dataharvest a stand-alone venture in its own right, fully independent from Journalismfund.eu.