Her work has been published in media outlets such as Deutsche Welle, Euronews, Al Jazeera, DanishBroadcasting Corporation, Hong Kong Broadcast TV, O Globo, Yle, and Bayerischer Rundfun among others.

Since 2011, she has reported on the social injustice and political corruption in Brazil and Latin America for e.g. the world’s first slum reporting news agency in Rio de Janeiro, “Agência de Notícias das Favelas”, and she has received several journalistic grants e.g. from the Ministry of Foreign Affairs of Denmark to report on femicides, machismo culture and environmentalism in Latin America and the migration crisis in Central America and Mexico.

In 2015, she was competitively selected as a fellow of the German International Journalists’ Program, IJP, to report on nationalism in Germany for ARD, and she works for organisations such as Transparency International, OXFAM International, Doctors Without Borders and European Federation of Journalists.

In 2017, she received the EYMD Jubilee award for excellence in media production from the European Parliament and European Youth Press for her work about hybrid warfare, fake news and media literacy in the Baltic countries, and she has conducted extensive research on freedom of expression in Russia. 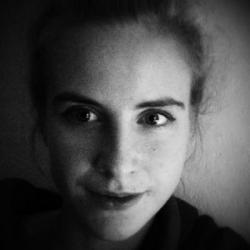