Harry Karanikas is an investigative reporter in print and digital media and a producer of various investigative broadcasts on Greek TV.

His work has included investigations on the role of complex financial deals that were used to cover up Greece’s and other EU countries’ deficits and on the “Greek statistics” that signaled the beginning of the economic crisis.

He has also investigated the pharmaceutical industry and the wiretapping of politicians’ phones, and various environmental issues such as the hexavalent chromium pollution of an area outside Athens. Karanikas is a member of ICIJ and worked on the World Bank, SwissLeaks and LuxLeaks stories. 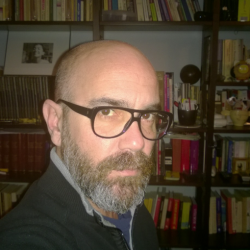 There is very little transparency in the private security sector. Questions often remain unanswered because the contracts are withheld on the grounds of commercial confidentiality. This lack of information means it is hard if not impossible to speak truth to powerful private security multinationals. In an age where political leaders seem obsessed with austerity measures, it should come as no surprise that they will not hold these companies accountable. What is it that we, the people, can do? Should private companies derive a profit off war and conflicts?