Jana Antonissen is a Belgian journalist.

Jana Antonissen (*1992) started her journalistic career in 2014 at the Belgian newspaper De Morgen, after which she decided to start working as an independent journalist. In her interviews, reports and essays she is interested in the personal stories behind current affairs. She is currently a columnist for De Morgen and also writes for the Belgian magazine Humo and the Dutch newspaper Vrij Nederland.
She met Sanne at the Paris-residence for young journalism and writing talent of Flemish-Dutch house deBuren. Since then they have worked together on several occasions, including for the reporting series "Oh My EU" that appeared in De Morgen in 2017. 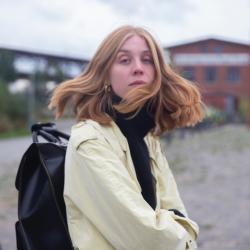 BEVEREN -‘Jailbirds’ intents to speak about the impact of the Covid-crisis and the lockdown, not only on a practical or economic level but to highlight mental processes and how it influences our psychological state. From a microcosmos: incarcerated life versus universal and collective uncertainty and the feeling of being deprived of physical and social freedom.