Leslie Verbeeck (°1985, Mechelen) is a professional film maker. He studied film at Narafi in Brussels and obtained his bachelor's degree. After his studies he started working for production companies like Caviar and The Fridge. He worked for Belgian feature films (Small Gods, Linkeroever, Dirty Mind), short films (Tunnelrat, Samaritan, Prediker) and TV. Since 2011 he works freelance as producer and director for diverse audiovisual projects. 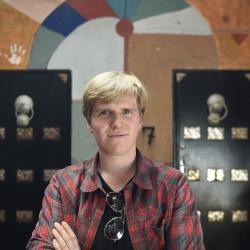 In Mali, the expression “aller en aventure” (setting off on an adventure) is widely known: young men are encouraged to spread their wings and leave the country to become a "real" man. Belgian actress Aminata Demba travels to Mali in the footsteps of her deceased father, to discover what drove him to undertake his journeys, before arriving in the Antwerp diamond district in the early 1970s. She discovers Mali, its culture of nomads and the importance of hospitality.