Marco Omizzolo is a researcher, journalist, and activist based in Rome.

He has written numerous national and international essays regarding the severe exploitation of the workforce in agriculture with particular attention on foreign labour and with a focus on the Indian community. He is a professor for University Sapienza of Rome in Sociopolitology of migrations and sociologist for Eurispes, a very important research center in Italy. He’s been writing about mafia and gang-mastering for the main Italian newspapers.
In 2018 he received an honour from the Italian President of the Republic for his loyalty in exposing crimes against humanity (Cavalier of Italian Republic). He has been recognized by the U.N. as a Human Right Defender.
In 2020, he was nominated for the biennial Madanjeet Singh Prize of UNESCO for his research and the results obtained against the exploitation of Indian laborers in Italy. 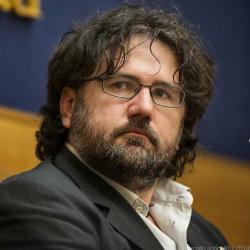 Busting Kabootar Baazi in Punjab: A trick or trade for trafficking women from India to Italy

PUNJAB - For years, the focus has been on men from Punjab who get trafficked to Europe, which is also colloquially known as Kabootar Baazi. This investigation by Journalismfund.eu's grantees reveal how Punjabi women are increasingly being trafficked by travel agents from India, but due to the social stigma, the state doesn’t have enough information about this growing menace.