Marleen Teugels (1959) is a lecturer-researcher and freelance journalist.

She teaches investigative journalism at the Arteveldehogeschool and conducts scientific research into the working conditions of journalists. As a journalist, she specializes in areas related to health and well-being.

The series of articles 'Asbestos, the serial killer', which she published together with a colleague in the Belgian weekly magazine Knack, was awarded the Dexia Prize and the VVOJ Prize in 2007. In 2002 she published 'Met stille trom', a book about the toxic impact of warfare, translated into French in 2003 under the title 'Armes sales, guerre propre? Teugels was also the first Belgian journalist to apply the law on public access to government (wob) in a dossier on the financing of smoke prevention campaigns by the tobacco industry, which, with the support of the Flemish Association of Journalists (VVJ), resulted in the first wob process by journalists. Together with colleagues, she managed to get the beneficiaries of the European agricultural subsidies in Flanders and federally through the wob partially above water. Most of her research stories were published in Knack. 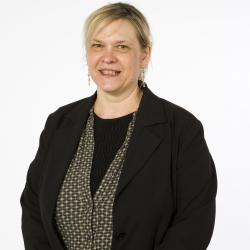 Asbestos is the perfect model of a substance mined, industrially exploited and widely marketed as a miracle material without proper research into its long-term effects on health. Indeed, it went on being promoted long after it was recognised as dangerous.