Matteo Civillini (1992) is an Italian freelance journalist and member of the Investigative Reporting Project Italy (IRPI).

After obtaining an MA in Investigative Journalism from City University London, he worked at VICE News and Associated Press. He specializes in stories about transnational organized crime, money-laundering and environmental issues. His work has been published by L'Espresso, La Repubblica, National Geographic, Sueddeutsche Zeitung, OCCRP, among others. He is also a member of Hostwriter, an online platform that allows freelance journalists from around the world to collaborate on cross-border stories. Civillini has been invited to present some of his work at events such as the International Journalism Festival, the European Investigative Journalism Conference, and Transparency International Summer School. 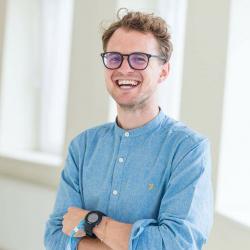 LAGOS - Lured by the prospects of a better life, thousands of African youths are braving the risks of crossing the Sahara and the Mediterranean for a chance to live in Europe. Victor, a 28-year old Nigerian graduate is one of several thousands of young Nigerians who have made the dangerous journey across the desert and the high seas in the last 5 years or so.