Michele Catanzaro (Rome, 1979) is a freelance science journalist based in Barcelona (Spain).

He holds a PhD in Physics (complex networks theory) from the Technical University of Catalonia (UPC).

He has worked for more than a decade as a freelance journalist, writing mainly on science, environment, health, technology, and science policy, but also covering current affairs related to the justice and organized crime.

He has worked for media in the UK, Spain, Italy, and Mexico, writing in English, Spanish, Italian, and Catalan. Among other media: the science magazine Nature, the newspaper El Periódico de Catalunya, and Le Scienze, the Italian version of Scientific American.

He has worked as well as director and script writer for RTVE (the Spanish public television), BarcelonaTV.

He is the author of "Networks: A Very Short Introduction" (Oxford University Press, 2012).

He has organized public lectures in science for the 150 years old cultural association Ateneu Barcelonès. He was press officer at the Institute of Photonic Sciences (ICFO) in Barcelona. He has experience in teaching, as tutor in science communication of students at the Autonomous University of Barcelona (UAB) and as organizer of science communication workshops for scientific societies and other institutions. His work has been recognized by several awards, among them the King of Spain International Journalism Prize, for his investigation in the unjust detention in Italy of the Spanish citizen Óscar Sánchez. He is member of the board of the Catalan Association for Science Communication. 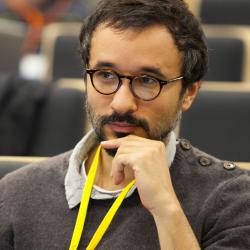 MADRID - What does the voice of a person reveal about his or her identity? Is it like DNA or fingerprint? How does the brain interpret voices? Are computers better than humans at doing it? Dozens of controversial judicial cases ring the alarm on the misuse of voices in courts.

After crossing seas and walls, some asylum seeker arriving in Europe have to cross one more wired fence: one made of words.