Olga Tokariuk-Shelest is a TV journalist and presenter and journalist with the Ukrainian independent TV station Hromadske with a focus on international news.

Since 2013, she has been reporting as a freelancer about events in Ukraine for various international media and working as a producer for foreign TV crews in Kiev (arranging interviews and organizing video shooting, translating, providing technical assistance).

Tokariuk-Shelest's previous journalistic experience in the Ukrainian media includes work as a foreign news correspondent for Ukraina TV (2013-2014), Inter TV (2007-2010), K1 TV (2005-2007). She holds an MA degree in Journalism from the National University of Kyiv (2008) and an MA in Political Science and International Relations from the University of Bologna (2012). 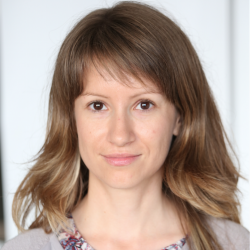 Imagine a little town in rural Ukraine, with potholed roads, decayed public buildings, ill-looking gas pipes. And its broadband Internet. A few years ago, broadband Internet brought a second life to families in villages like that.