Olivia Kortas is a freelance research journalist. She believes that good journalism should take time for thorough research and a complete and neutral understanding of people and their lives. Olivia wants to show how political and economic power games change people's lives and put pressure on them.

In 2016 Olivia Kortas graduated from the LMU in Munich, with a bachelor's degree in communication sciences and psychology. She conducted scientific interviews with the majority of German war journalists under thirty. In addition, she did a year of specialization training in European and foreign journalism in the Netherlands and Denmark.

Olivia digs in what moves people at local, national and international level. During an 18-month-long training program at the local newspaper Passauer Neue Presse, she wrote about workers in the main region for glass production in Germany. She investigated how they lost their most work after an Austrian entrepreneur took over their factory and then moved the production.

As a freelancer, Olivia published articles for media such as Al Jazeera English, Die Welt, VICE, Cicero and the Krakow Post. One of her first journalistic projects brought her to Southeast Turkey. She interviewed refugees in camps near the Syrian border and spoke with politicians from the Kurdish opposition party HDP about the parliamentary elections. There she discovered her passion for foreign journalism. Her Polish roots inspire her to continue that passion in Eastern Europe. As a traveling reporter she showed how the Belarusian government suppresses opposition voices such as street musicians. She also traveled to Greece to portray the situation of refugees for international media.

Since 2016, Olivia has been a member of the journalistic collective The Caravan's Journal. 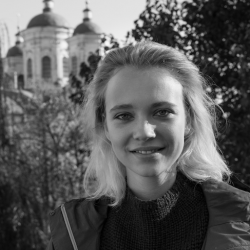 NANYUKI - De Mens en de Hoorn is a project by Olivia Kortas and Kasper Goethals in collaboration with photographer Johannes De Bruycker. Based on the story of Najin and Fatu, the last two northern white rhinos on earth, they tell about the dysfunctional relationship between humans and their planet.