Ottavia Spaggiari is an investigative journalist and long-form writer.

Her work has appeared in The Guardian, The New Yorker, Slate, The New Humanitarian and others. She has been a fellow at Columbia Journalism School’s Global Migration Project and at the Alicia Patterson Foundation. From development aid to migration issues, from gender-based violence to police brutality, Ottavia has covered a wide range of topics, reporting from several European countries, sub-Saharan Africa and the US. Her feature on human traffickers' impunity in Italy came runner-up at the 2021 European Press Prize in the “distinguished reporting" category. She received her Master of Arts in Politics and Global Affairs from Columbia University Graduate School of Journalism where she was a San Paolo fellow. 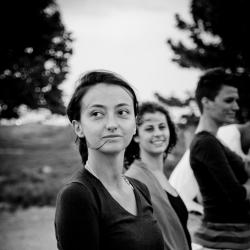 MINSK - 72 Hours That Changed Belarus tells the story of the post-election collapse of human rights in the country through the first-hand experiences of those affected the most: a young couple injured by a stun grenade, a recent law graduate who documented torture and later fled to protect herself and the evidence, a blogger and a student who were tortured inside the infamous Okrestina jail in Minsk.