Patrick Mayoyo is the founder and Editorial Director of www.dailyreporter.co.ke.

He primarily writes about financial issues and the environment.

Patrick Mayoyo is the founder and Editor-in-Chief at Next Generation Media Ltd, the publishers of www.reporter.co.ke and www.africaeconews.co.ke and the soon to be launched political newspaper the Weekly Digest.
Mayoyo is a dynamic, skilled and experienced investigative journalist based in Kenya who has written extensively on the environment, business and politics.
He is a winner of the 2015 European Commission`s Lorenzo Natali Media Prize. Mayoyo won the Europe professional category with his story, “How to grow food in a slum: lessons from the sack farmers of Kibera” that was published by The Guardian of UK.
Story link http://tinyurl.com/pbwbj5q . The story reveals how residents of Kibera, in Nairobi, one of Africa’s largest slums in Kenya, have found a new way of responding to the challenge of food insecurity.

He is also the CNN African Journalist Awards 2014 Environment category winner, 2014 African Climate Change and Environmental Reporting award online category and overall winner and the 2013 East Africa Community Awards’ Environment Reporting award first runner-up. An expose he did on how oil exploration firms searching for oil in Kenya did so in total disregard to internationally accepted principles for sustainable development won him the Social and Environmental Responsibility World Journalism Prize in 2007.

He is a member of the Forum for African Investigative Reporters (FAIR) and the Global Investigative Journalists Network (GIJN).
He studied journalism at the London School of Journalism and he is currently pursuing a Master of Arts degree in Leading Innovation and Change.
He is a former Deputy News Editor with the Daily Nation newspaper in Kenya.

As part of his efforts to investigate the phenomenon of disappearing glaciers on Africa’s top mountains, Mayoyo successfully climbed to the peaks of both Mt Kenya in Kenya and Mt Kilimanjaro in Tanzania. See the link : View
Mayoyo is the 2014-2015 The ACCER Awards Finalists Academy (TAAFA) fellow. 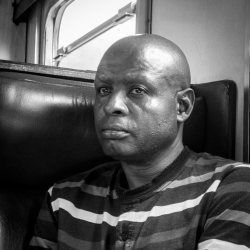 How did one of Africa's biggest investment companies spend the money they collected from international developments banks for the refurbishment of the Rift Valley Railway?