Peter Triest (1973) is a filmmaker, communications consultant and copywriter.

His debut film 'Out of the Desert' (2016 - 50') is an intimate portrait of Howe Gelb, an American cult musician. The film premiered at the Arizona International Film Festival and was shown at the Belgian Film Festival in Utrecht, among other venues.

In 2016, he won the IDFA/Media Fund Prize in Amsterdam with the film plan for 'A Parked Life'. The film was produced by Savage Film (known for Dealer, Rundskop, D'Ardennen and Land of the Enlightment) for CANVAS and KRO/NCRV. At its world premiere at FIPADOC 2022, the film won the Young Europeans Award. 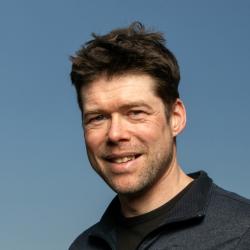 BRUSSELS - Money is Petar's main reason for becoming a long-distance truck driver: it can give his child a future. But as the weeks and months go by, Petar feels his dreams slipping through his fingers.