He graduated in 2013 as a radio maker at the RITCS School of Arts in Brussels. His productions found their way to channels in Flanders, the Netherlands, Germany and the US. He won the prize for best radio play at the prestigious European media prize Prix Europa. He is also one of the driving forces behind the Plantrekkers podcast. He is currently working on a film documentary series about young people and a podcast series for the Flemish public broadcaster, Radio 1. 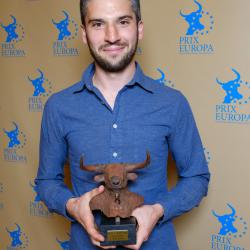 BRUSSELS - One-third of the women in Belgium have a pension of less than 750 euros. That's little, but doesn't have to be a problem: if you are happily married, have a long career behind you and can put the money together as a couple. But for a whole group of women, this is not the case. The baby boomers are the first generation to divorce in such large numbers. Before that, couples used to stay together forever.

MERKSPLAS - March 2020. Corona shuts down Belgium. Everyone has to stay inside. Door closed, one hour a day outside. A story that sounds familiar to the residents of Merksplas prison.

BRUSSELS - The sperm bank appeals to the imagination. Especially its pioneering years, when there were no rules and doctors did as they pleased. Yet hardly anyone knows how it used to be, because donor insemination happened in the greatest secrecy.

BEERVELDE - Every night the last train leaves for the Belgian village of Beervelde, located along the E17. From the station, young men and women try to reach one of the nearby motorway parking lots, usually on foot. There they try to get on a truck that will bring them to England.