‘Wablieft’ (Flemish interjection meaning ‘Excuse me?’) is a newspaper that has been providing clear news for low-literate adults in Flanders (the Dutch-speaking part of Belgium) for more than thirty years. Next to a weekly newspaper Wablieft also publishes ‘Wablieft Start’, a biweekly news magazine in even simpler Dutch.

The Wablieft newspapers are read by a wide audience: from adults with low literacy and newcomers to the elderly and people with disabilities. In short, everyone for whom other media sources in Flanders are too difficult.

Until Wablieft, there was no online news channel with quality news for adults with lower language proficiency in Dutch. Very often this target group had to rely on news websites for children or adolescents. However, the content of these news sites did not fit in with their world, interests and needs.

Thus, Wablieft decided to develop a digital Wablieft and Wablieft Start newspaper with the support of the Flemish Journalism Fund. In doing so, the organization is filling a gap in the online journalism currently available, increasing the pluriformity of the news media in Flanders, and bringing more people in contact with qualitative news.

Not only on the language level

Wablieft was able to apply its specific expertise in the development of the website. After all, people with low levels of literacy often have difficulties on digital platforms as well. Most websites are not conducive to their linguistic limitations and needs, and they can also be difficult for them to navigate and use. Therefore, the platform was tested with different user groups for maximum clarity and user-friendliness.

New articles appear on the website every day of the week. This meant that Wablieft also needed to reconsider its own editorial schedule, which had always been focused on weekly publication.

The online newspaper works with a partial payment wall. Some of the articles are accessible to everyone free of charge. Subscribers to the print edition of Wablieft or Wablieft Start receive full online access as well. Only schools and people living abroad can sign up for the digital version only.

Wablieft explains the project in its own words:

With the “Wablieft goes digital” project, we developed and published two online newspapers: Wablieft and Wablieft Start. These newspapers are a digital supplement and continuation of the paper versions of Wablieft’s simple-language newspapers.

Prior to development, we investigated the specific requirements for setting up digital newspapers.

Through this initiative, we aim to bring high-quality, daily online news to adults with lower levels of literacy. This target group also includes non-Dutch speakers who are still learning Dutch.

The grant from the FJF made it possible to fund research and the start-up of Wablieft and Wablieft Start online. These digital newspapers were launched according to plan, and today they are primary news sources for the intended target group.

The timing was initially too tight, which required shifts (also in terms of resources) in the later phases. One thing we would like to do is plan a detailed feedback session with users/readers at a later stage (after six months) when it is more feasible to carry out.

What will be the impact of this project once the subsidy period has ended? Will it continue to exist, or has it contributed or changed anything in your company or organisation?

There has been a major impact in terms of the digital presence of the Wablieft newspapers and the number of active users/readers. The initiative will most certainly continue in the future. One major change, both in terms of content and writing style, is that articles are conceived of and written from a “content-first” approach.

That there is no way to stop the digitalization of the news. That even niche initiatives (like Wablieft) can be a part of that with the support of organizations like the FJF.

Wablieft brings news in simple language to people who need it. With Wablieft online, we can reach a wider audience and expand our original target group. Through this project, we’re also spreading the message for a more accessible, inclusive society. 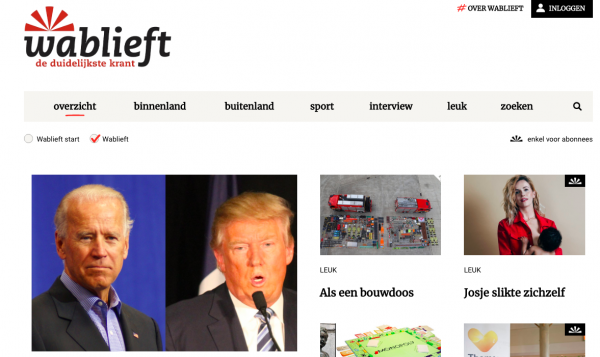