Philip Heremans is a Belgian filmmaker and actor.

Philip Heremans graduated from the KASK (School of Arts) in Ghent in 2016 with a master's degree in audiovisual arts. Soon after, he moved to Berlin and appeared on film sets by Babette Mangolte and Anne Teresa De Keersmaeker, among others. He then worked closely with Lav Diaz on two film projects, for which he was invited to the Cannes Film Festival in 2019. He is currently working on his first feature film. 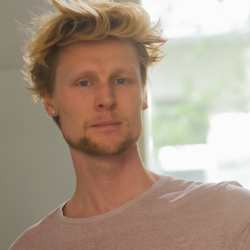 NEW YORK - The documentary 'Pride is Protest' offers an insight into the LGBTQ scene in New York, 50 years after Stonewall. Marieke Dermul and Filip Tielens went to New York for a week in June 2019 during the biggest Pride ever. They talked to a veteran of the 1969 riots about positive changes, but also to young LGBT people, transgenders and people of colour about discrimination in the year 2019. What do they think should be fought for today? And how does that translate into contemporary activism and protest, besides the great party that a Pride is every time again?