ISLAMABAD -- The American president Obama described a part of Pakistan as ‘the most dangerous place on earth’. The country is dangerous in two ways: dangerous to itself, as few places yield as many bomb attacks and victims, but also dangerous to the rest of the world, as the bombings are exported and Pakistan is a nuclear power, with ‘Islamic’ bombs that are perhaps not sufficiently secured.

Since a couple of weeks, since just before the first dyke burst, and just before the country landed in the midst of an unprecedented water calamity, Rudi Rotthier is in Pakistan. He will travel around for three months, and see how the country is doing. He had assumed his movements would be restricted, for security reasons and due to official meddling, but up to now he feels reasonably free to roam around. If it is all possible, because many areas are perhaps cut off for longer duration, he would like to revisit some places he went to twenty years ago. Like Hunza Valley, the valley of longevity (where the tolerant local brand of Islam is now under attack), like the Afghan refugee camps and the centres for drug addicts in Peshawar.

Rudi Rotthier is a Belgian journalist and travel writer. 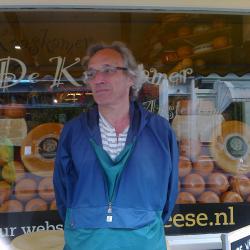 Between Antwerp and Baghdad