Aimée de Jongh (1988) is an animator, comic author and illustrator from Rotterdam, the Netherlands. She studied Animation at the Willem de Kooning Academy in Rotterdam, at KASK Gent and at Gobelin's École de l'Image in Paris.

Aimée released her first book at the age of 17, and since then created more than 10 comic series, including the daily comic 'Snippers' for Metro. Other works include journalistic comics, children's book illustrations, independent animated films and animations for TV. In 2014 Aimée was artist-in-residence in Los Angeles. Her film 'Janus' was shown that year at the Whitney Museum in New York. Aimée's graphic novel 'The Return of The Honey Buzzard' tells the story of bookseller Simon, who is undergoing a financial and emotional crisis. The book won the Prix Saint-Michel, and was translated into English, French, Spanish and Serbian. In 2016 a Dutch feature film was based on the book. Aimée mainly works digitally. 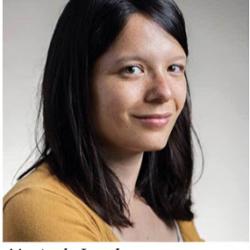