Caroline Muscat is a Maltese award-winning investigative journalist and the founder of The Shift, an online investigative news portal based in Malta.

She is the former news editor of The Times and The Sunday Times of Malta. Her main areas of focus are corruption, human rights and environmental issues.

Caroline contributed to and co-edited the book, ‘Invicta: The Life and Work of Daphne Caruana Galizia’, a journalist assassinated in Malta in October 2017. Her work has been featured in a number of international publications and she has been interviewed on press freedom issues by major international media including Al Jazeera, BBC World, Euronews, The Guardian, and ZDF.

She was awarded the prestigious Reporters Without Borders Prize for Independence in 2019 for her dedication to investigative journalism in the public interest in a hostile climate.

Caroline is regularly invited to address conferences and workshops on challenges faced by the media and policies needed to strengthen press freedom in Europe. 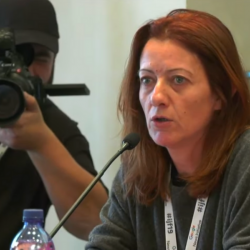