He has been working as a freelance reporter for newspapers and magazines, radio and TV since 2007. From 2011 until 2014, he lived in Tel Aviv to report about the Middle East. He cycled back to Berlin afterwards.

Fredy Gareis was born in Alma-Ata and grew up in a working-class district of the Opel town Rüsselsheim. After school, he beat himself as a bartender, drug tester and taxi driver and thus financed his travel fever. Finally, studying American history and literature, followed by training as a journalist at the DJS in Munich.

Then worked as a freelance reporter for DIE ZEIT, Tagesspiegel, Deutschlandradio and other media. Among other things, Fredy Gareis researched undercover for five months at Scientology's German headquarters, was a clerk in Maribor, and from 2010 to 2012 he was a correspondent from Israel and the Middle East. He was awarded the journalism prize of the German Cultural Council for the reportage "A Picasso in Palestine" published in DIE ZEIT; for "100 grams of vodka" he received the ITB Book Award 2016. A fortune teller in Russia has prophesied a long life for him, as long as he gargles with soda every day. 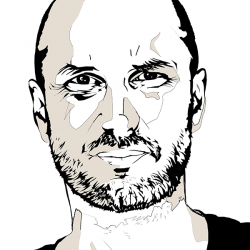 Kunstjagd - The Hunt for the Jewish Mona Lisa

A painting that saved the lives of more than 30 people but has been lost for almost eight decades. A case of looted art that leads from Germany’s present right into its dark past. That is the subject of the Kunstjagd investigation, a crowdsourced hunt for a piece of art.