Johanna Vehkoo is a Finnish journalist at Long Play.

Together with twenty-one other journalists from eleven European countries, she investigated the European security sector. The result was a big scale journalismfund supported project dubbed 'Security for Sale'.

Johanna Vehkoo is a journalist, author and occasional researcher. Recently, she published her third book – it's a book of comics journalism about online hate. (In Finnish: Vihan ja inhon internet.) Working on her fourth: Lie Detector's Handbook (Valheenpaljastajan käsikirja).

Johanna Vehkoo is one of the founders of Long Play, a digital publisher of longform investigative journalism.
She works as a freelance journalist and frequently gives talks and seminars about the future of journalism and practical workshops about digital journalism. she is specialised in fact-checking, verification, disinformation on the web.

Johanna Vehkoo has been a visiting scholar at Reuters Institute, Oxford University, and the Wilson Center in Washington D.C. 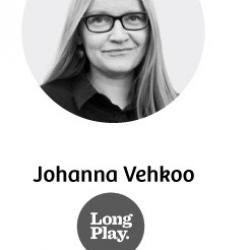