Kai Biermann is a German journalist at Zeit Online.

Biermann graduated in psychology in 1997 from the Humboldt University in Berlin and worked in parallel with the journal Brigitte. After a traineeship at the Berliner Zeitung, he worked for the Financial Times Deutschland, the Netzeitung and the Bildblog. Since 2007, he has been working for Zeit Online. From 2009, he is responsible for Internet, data protection and network policy in the digital sector. Between 2009 and 2011 he was head of the department for Digital, Knowledge, Studies. Since 2014 he is a member of the newly founded Investigative / Data team. He oversees the Data Blog, which deals with Open Data and reports regularly from the NSA Investigative Committee.

Together with twenty-one other journalists from eleven European countries, he investigated the European security sector. The result was a big scale journalismfund supported project dubbed 'Security for Sale'. 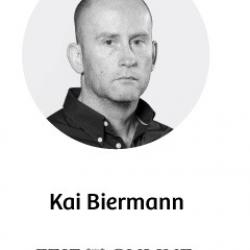