Paweł Pieniążek is a Polish journalist, has reported on refugee crisis, wars in Ukraine, Iraq and Syria. His stories and images have appeared in international and national media such as  "Open Democracy", "Radio Free Europe/Radio Liberty", "Gazeta Wyborcza", and "Tygodnik Powszechny". He was a fellow at the Poynter Fellowship at Yale University in 2015. He is the author of three books: "Po kalifacie", "Wojna, która nas zmieniła" i "Pozdrowienia z Noworosji" (with professor Timothy Snyder's introduction published in English; "Greetings from Novorossiya"). In 2019, he was awarded the prestigious MediaTory prize in Polish journalism for covering the war in Syria. 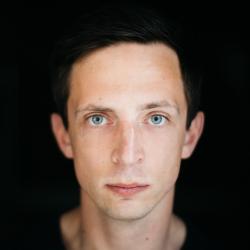