Shanna Jones is a freelance international journalist with a passion for data-led reporting combined with on-the-ground interviews. She has reported for British and US media from sex worker safe houses in Freetown, the Red Light District in Amsterdam, Calais refugee camp and the depths of the British Land Registry.

She has investigated the exploitation of local sex workers by NGO staff, depicted grassroots refugee solidarity movements and participated in data-led investigations into offshore finance. Highlights of her career include interviewing the 2018 Nobel Peace Prize winner, Denis Mukwege, for the Economist and being selected by The Money Trail Project to carry out a cross-border investigation into illicit finance. 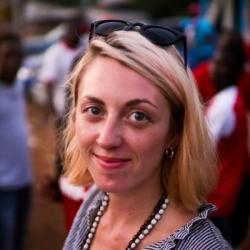