See you in paradise

PALESTINIAN TERRITORIES - They are omnipresent in the West Bank and they look at you from walls, in bus shelters and on lampposts: the Palestinian martyrs. But what is the context of those decayed Palestinian martyr posters?

The Palestinian-Israeli conflict has been dragging on for many decades, resulting in a considerable number of deaths each year. So-called martyr posters are omnipresent on the West Bank in the Occupied Palestinian Territories. They depict not only soldiers, activists or suicide bombers, but also ordinary civilians who have died. All these dead are honoured in the same way: with a poster. Being a martyr in Palestine does not just mean dying for your faith, as is generally assumed in the West. Modern martyrdom is also for someone who gives his life for the fatherland. A patriot who dies is commemorated as a martyr by local public opinion, whatever the religious preference.

The Palestinian death cult continues. Children, cancer patients, drowning people, people with heart failure are also given a place in this tradition at the time of their death, although their death can at best be indirectly linked to the occupation. Becoming a martyr is their way of giving meaning to a life without perspective. Many Palestinians have pictures taken while they are alive, which can later function on a poster. The use of photomontage techniques by certain militant movements for propaganda purposes gives these innocent commemorative documents a sour taste. A dozen personal testimonies from relatives of this diverse group of martyrs (militants, politicians, women, children and ordinary citizens) create a new, nuanced and refreshing context that is necessary for Westerners to understand the complexity of the worship of the dead in the West Bank.

Sander Buyck is a Belgian photographer. 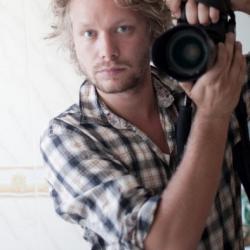 Civil society in Israel and Palestine