Currently he writes for the Dutch magazine De Groene Amsterdammer, about pollution and climate change. Previously he worked as a staff reporter at several newspapers and magazines in The Netherlands, like NRC Handelsblad and Intermediair, covering economic affairs.

Luuk teaches at universities and in news rooms, but has also trained and advised NGO's like Greenpeace and Friends of the Earth. His fields of expertise are investigative project management, interviewing and data journalism. Together with Mark Lee Hunter he developed Story-Based Inquiry, a benchmark method for investigative journalism, adopted by Unesco and training centers around the world.

Luuk co-authored six books about investigative reporting and he regularly speaks at IRE, GIJC, CIJ and Dataharvest conferences, the world’s leading forums for investigative journalisms best practices. He served ten years in the board of the VVOJ, the Dutch-Belgium association of investigative journalists. He has a masters degree in Social-Economic History from Radboud University Nijmegen. 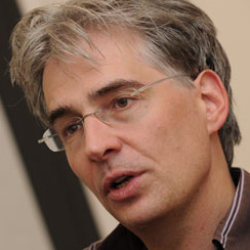 Steel producers and other industrial sectors must comply with new EU emission rules by 2016. But the giants of the steel industry have watered down their obligations after a successful lobbying campaign within the EU decision-making process.