2019 - Year of records and progress for Journalismfund.eu

For Journalismfund.eu 2019 proved a year of consolidation and continued growth for its current programmes and its grantees. Record amounts of grant money over the past two years – 920.651 euro in 2019 and 1.230.567 euro in 2018 – were allocated to the teams of journalists worldwide. In 2019 alone, we supported 119 projects consisting of 262 journalists all over Europe and beyond.

In 2019 there were eleven application rounds organised by Journalismfund.eu for all its three grant programmes in total: four application rounds for the European Cross-Border Grants, three for the Pascal Decroos Fund and four for the Money Trail Grants.

In 2019 a record number of journalists with a broad geographic spread applied for Journalismfund.eu's grants. In total, 547 applicants submitted 269 proposals for one of our three current grant programmes (more than in 2018).

For the European Cross-Border Grants alone, 236 journalists submitted 76 applications asking for 1.113.316 euro in total (the highest amount this grant programme has been asked for since its launch in 2009). 194 journalists applied for the Pascal Decroos Fund with 149 projects. 104 applicants submitted 42 proposals for Money Trail Grants.

In all, 119 projects have been supported in total by Journalismfund.eu. 262 journalists  received a grant from one of our three grant programmes in 2019 (which is more than in the previous year).

For the European Cross-Border Grants alone, 32 applications, submitted by 85 applicants in total, were approved. It was the largest number of supported projects by this programme since 2009. Moreover, 24 teams with 75 journalists received a Money Trail Grant. The Pascal Decroos Fund supported 61 projects with 89 grantees. 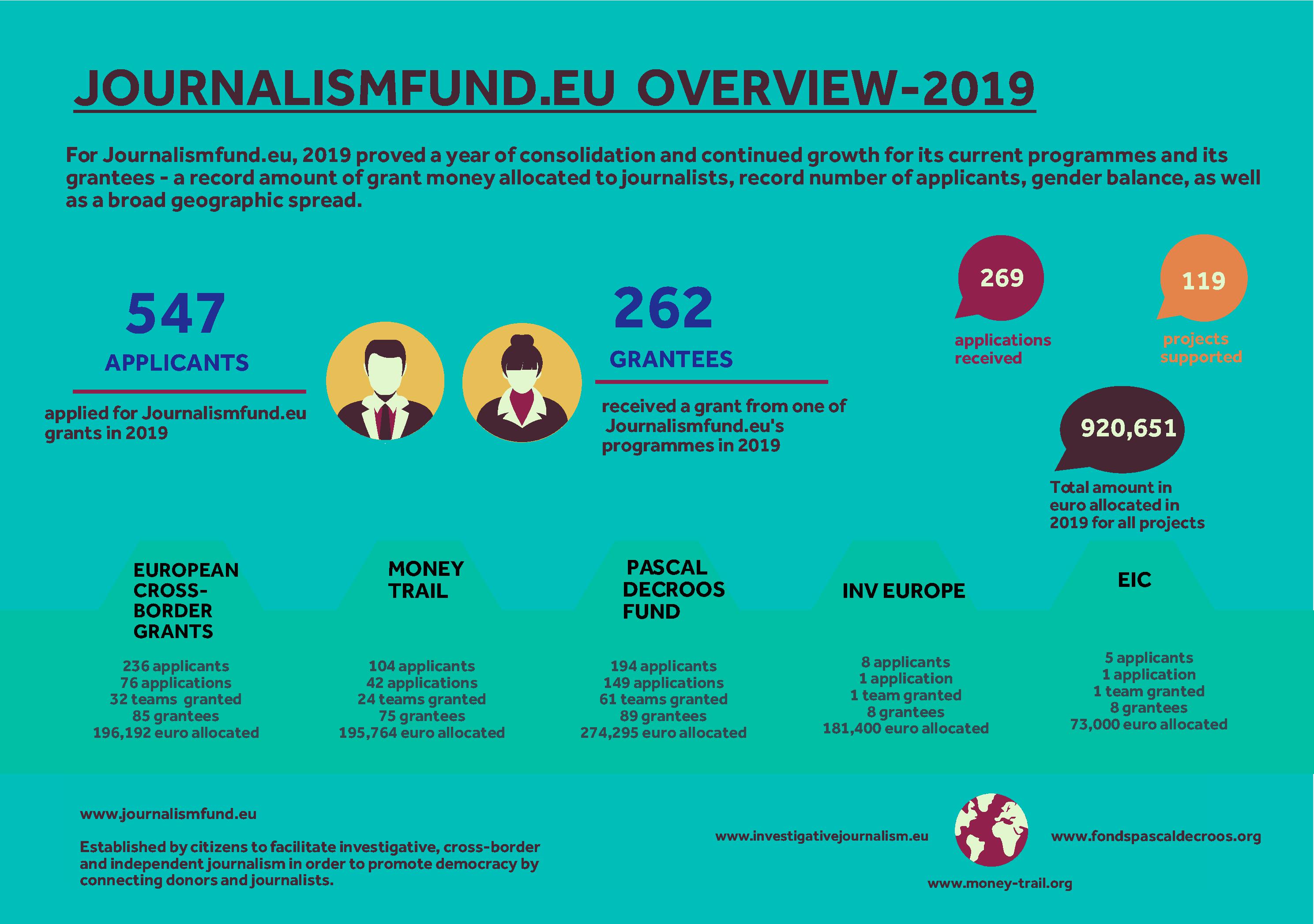 Taking into consideration Journalismfund.eu's successes of 2019 with great impact for journalistic stories and the records concerning the amounts allocated and the number of granted teams, in 2020 Journalismfund.eu will continue to advance investigative, cross-border and independent journalism in order to promote democracy all over Europe and worldwide.

The European Press Prize has published all shortlisted projects for 2020. You can find all the nominated works now on its website to read and explore.

BRUSSELS – European Cross-Border Grants program for teams of professional European journalists has got a deadline coming up on the 15th of April. In the run-up to this deadline, we offer advice to journalists with questions about their idea or application.