A girl for day and night

A taboo-breaking story about the hidden problem of incest in immigrant families in the Netherlands.
As a child, Ibtisam is sexually abused by her brother. She can do nothing about it, because in the traditional Moroccan family in which she is being raised, family honour is sacred and nothing shameful is ever revealed to the outside world. Ibtisam’s brothers are treated like little princes. They are never called to account, no matter what they do. Sex is taboo, and sex outside of marriage is strictly forbidden. If it does happen, the woman is almost always to be blamed. For years Ibtisam can do nothing. She has to hold her tongue and let her brother have his way. She puts up with this until she reaches an age at which she realises she might become pregnant.
‘A girl for day and night’ is a taboo-breaking story about the problem of incest in immigrant families in the Netherlands. It sheds light on a hidden problem, but more importantly, it also shows that victims are not alone and can look for help. Ibtisam has now found a good job and leads a happy, abuse-free life.

‘Like no other, Renate van der Zee manages to break through the barriers and reveal the sensitive and intimate issues facing ethnic minorities. What goes on behind those barriers turns out to be of far-reaching public consequence. Read her equally informed and passionate reports!’ – Frank Bovenkerk, professor of criminology
‘With her clear language and poignant human stories, Renate van der Zee enthrals from start to finish.’ – VPRO-radio
-------
Prologue
‘Are you coming upstairs, Sam?’ shouts my brother Rachid. ‘I’m going to tell a story.’ I rush upstairs as quickly as my little legs will carry me. I love it when my brother tells us stories. Not that his stories are all that special. They always begin in the same way: ‘Once upon a time, there were four brothers.’ The storyline is also always the same: the four brothers become very rich and live happily ever after. Usually they earn lots of money, running a shop that turns out to be incredibly successful. Or they win the lottery. But sometimes such a story has an unexpected twist and we suddenly find ourselves among cowboys and Indians, with my brothers Ali, Rachid, Mohammed and Mimoun as a Muslim version of the Dalton brothers.
In his stories Rachid is always the biggest daredevil of the bunch. He can get away with taking that role, because my eldest brother Ali takes himself far too seriously to come and listen to his younger brother’s stories. Otherwise, he would probably demand the leading role.
Although Rachid’s stories show very little variation, it’s the way in which he tells them that makes them gripping. He gets completely caught up in them; he really seems to believe them. His beady eyes sparkle, his voice soars. And we hang on to his every word, we think it’s wonderful, we are completely engrossed. I just as much as my brothers, although I needn’t expect to be given a role in any of my brother’s stories. He only gratifies my wish if I pester him about it for long enough. Then he quickly adds a supporting role for his little sister, in order to be done with all the nagging.
Sometimes he teases us. Right in the middle of the story he’ll say: ‘I’ll carry on tomorrow.’ When he does that, we beg him to continue, we promise we’ll do anything he wants, anything, but he leaves us dangling. And just when we think that all our pleas have been in vain and we are feverishly trying to dream up other ways of convincing him, he picks up where he left off, and within a few seconds we are back in the middle of an adventure.
This evening he is in great form. The four brothers rob a train and wage a bloody battle against the savage Indians. My brothers and I listen with bated breath. We are all lying in Rachid’s bed, in the big bedroom upstairs, at the front of the house. It is the only room in the house that has two windows, even though the left one is broken. To keep out the worst of the weather, my father has stuck a piece of plastic over it, but to no avail. It is cold and damp. That doesn’t bother us however, not with the five of us snuggled up together under a warm, brown blanket with an orange flower pattern. And besides, we are all off in the blazing sun, chasing after Indians.
Outside, dusk is falling. We haven’t put the lights on, because of the extra excitement of listening in the dark. I’m lying next to my big brother Rachid, who always takes me on his lap when he comes home and tells me all the exciting things he has been doing all day. Big brother Rachid, who is tough and strong. Big brother Rachid, who sticks up for his little brothers when they are bullied by children in the street.
I cuddle up to him, as I listen to his familiar voice.
But then something strange happens. Rachid takes my hand. He never does that, he never takes my hand. I try to ignore it. I don’t want to be distracted from the glorious adventure. But I am. Before I know what is happening, my brother has put my hand between his legs.
The blood drains from my face.
I pull my hand away.
Rachid simply carries on telling his story. The four brothers have stolen heaps of money from the train and have slaughtered all the Indians. They build a house, big enough for them all to live in it. It has a colour TV in the living room and a shiny new car parked outside the front door. The brothers are all wearing brand-new jeans.
While he keeps on talking, Rachid grabs my hand again and puts it back between his legs. He holds it tightly and starts rubbing it against his body. I gasp for breath.
I pull myself free, jump out of bed, and rush out of the room. ‘No!’ shouts my youngest brother Mimoun. ‘The story isn’t over yet!’
Translation: Stephen Smith
Team members

Renate van der Zee is a journalist, and writes for magazines and newspapers such as Opzij, Libelle and NRC Handelsblad. 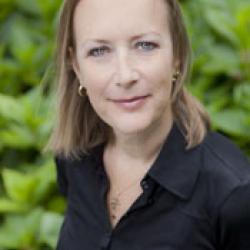